How electricity is generated in thermal power plant?

In thermal power plants, the heat energy obtained from the combustion of fuel (coal/natural gas/other carbon base fuel) is used to convert water into steam. The high temperature and pressure steam are used to rotate the turbine blade, turbine shaft is connected to generator. The generator converts the kinetic energy into electric energy.

How does a coal power plant work? 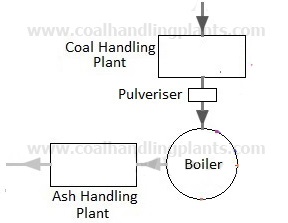 Coal arrives at the coal handling plant and after necessary handling, passes on the furnace through pulveriser & fuel feeding device. Ash resulting from the combustion of coal collects at the back of the boiler and is removed to the ash storage through ash handling plant. 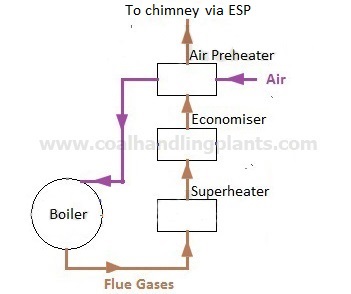 Air is taken from atmosphere through the action of forced draught (FD) fan and passes on the furnace through air preheater. Flue gases are produced when coal is combusted in the boiler. The flue gases after passing around boiler tubes and superheater tubes in the furnace pass through an economiser and finally through the air preheater before being exhausted to the atmosphere via electro static precipitator (ESP) & chimney. 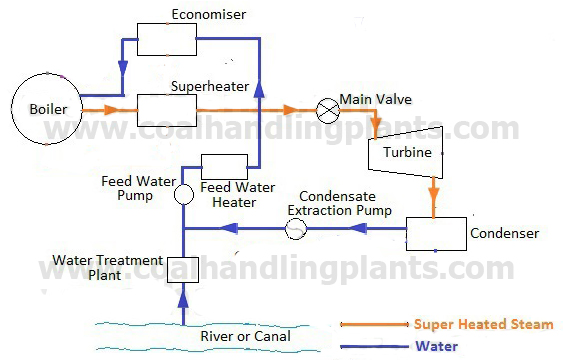 In the water and steam circuit condensate leaving the condenser is passes through the deaerator and water heaters before going the boiler through economiser.

In the boiler drum and tubes, water circulates due to the difference between the density of water in the lower temperature and the higher temperature section of the boiler. Wet steam from the drum is further heated up in the superheater before being supplied to the turbine. After expanding in turbine steam is condensed in the condenser. The condensate leaving the condenser is circulated to boiler. A part of steam and water is lost while passing through different components and this compensated by supplying additional feed water. This feed water is purified & softened before going the boiler, to avoid the scaling of the tubes of the boiler. The purification and softening of water are done in water treatment plant.

The cooling water supply to the condenser helps in maintaining a low pressure in it. The cooled water extract heats from turbine exhaust steam in the condenser and become hot. Hot water gets cooled after passing through cooling tower and again circulated to condenser through circulating water pump.

A part of water is lost in the cooling tower and this compensated by supplying the water from a natural source such as river, lake or sea.