It is an enclosed pressure vessel in which water is converted into steam by gaining heat from any source (coal, oil, gas etc).

Boiler in thermal power plant accumulates the steam and build up a pressure to expend it in turbine and convert thermal energy to mechanical energy. The generator which is connected to turbine converts the mechanical energy into electric energy.

2. Base on Operating Pressure

3. Base on Fuel Used

4. Based on Draught System

Note: Both types of boiler are water tube boiler 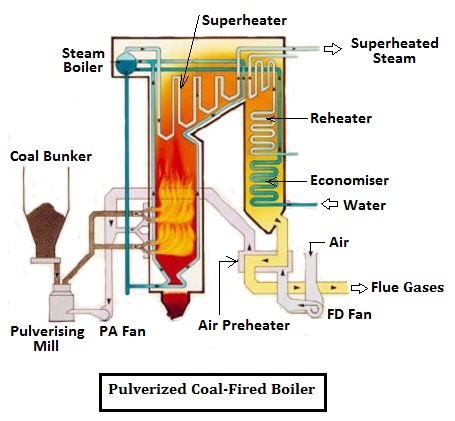 How does a steam boiler work?

In pulverized coal fired boiler,The coal is pulverized to a fine powder, so that less than 2 % is +300 micro meter and 70 – 75 % is below 75 microns. The pulverized coal is blown with part of the combustion air into boiler plant through a series of burner nozzles. Combustion takes place at temperature from 1300 – 1700 °C, depending largely on coal grade.

The flue gas formed in the furnace passes over the  superheater, economizer, air-preheater, ESP and finally is evacuated by the induced draft fan into the chimney.

The ash from the combustion chamber, which falls down is collected in the bottom ash hoppers. The ash which is fine & flies with the flue gas is separated by ESP and collected in ESP hoppers.

The water is circulated in the tubes and converted into steam by gaining heat inside the furnace.The dry and saturated steam from the boiler drum then passes through the superheater section and finally available at the boiler outlet header.

Pulverized coal fire boiler has been the preferred method for solid fuel firing but in the last few years, fluidized bed combustion boilers have begun to disturb this equilibrium by offering reliable solutions in the areas not served well by pulverized fuel boiler.

When gas or air is passed through an inert bed of solid particles such as sand or limestone supported on a fine grid or mesh, the particle are undisturbed at low velocity. As air velocity is gradually increased, a stage is reached when the individual particle are suspended in the air stream. With further increase in the velocity of the air, the particles attain a state of high turbulence. Under such conditions, the bed assumes the appearance of a fluid and exhibits the properties associated with a fluid and hence the name “Fluidized Bed combustion”.

If the sand or limestone in a fluidized state is heated to the ignition temperature of the coal and the coal is injected continuously into the bed, the fuel will burn rapidly and the bed attains a uniform temperature due to effective mixing.

The fluidized bed combustion takes place at a temperature of 840°C to 950 °C. Since the temperature is below the ash fusion temperature, melting of ash and associated problems are avoided.

There are three types of fluidized bed combustion boilers: 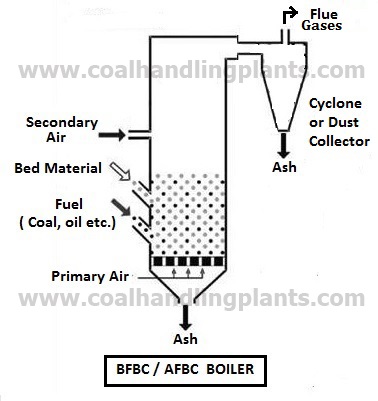 AFBC is atmospheric fluidized bed combustion, where the furnace pressure is atmospheric pressure and velocity of fluidized air is in the range of 1.2 to 3.7 m/sec. The in-bed tubes carrying water generally act as the evaporator. The flue gas from the furnace pass over the superheater sections of the boiler flow past the economizer, the dust collector and the air preheater before being exhausted to atmosphere. 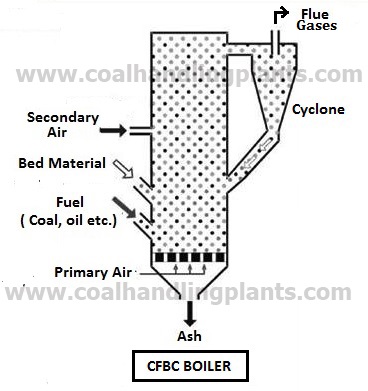 In this system, the fluidized velocity in circulating beds ranges from 3.7 to 9 m/sec and the flue gas is recirculated with a cyclone to capture the unburnt carbon. There are no steam generation tubes immersed in the bad. Generation and super heating of steam takes place in the convection section, water wall and at the exit of the riser. 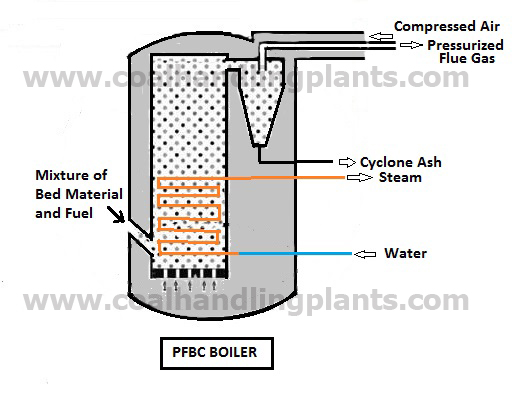 In PFBC, a compressor supplies the forced draft (FD) air and the combustor is a pressure vessel. The heat release rate in the bad is proportional to the bed pressure and hence a deep bed is used to extract large amount of heat. This will improve the combustion efficiency. Steam generated from the heat in the fluidized bed is sent to a steam turbine and hot flue gases drive a power generating gas turbine.

The PFBC system can be used for combined cycle operation (gas turbine and steam turbine). This improves the overall conversion efficiency by 5 to 8 %.

A steam boiler is designed to absorb the maximum amount of heat released from the process of combustion. There are three way (Radiation, convection & Conduction) that heat is transfer in the boiler and relative percentage of each heat transfer within system boiler is dependent on the type of steam boiler, fuels and the designed transfer surface.

Radiation is the process of continuous interchange of energy by means of electromagnetic waves without a change in the temperature of the medium between two bodies involved.

The heating surface in the furnace are receives heat primarily by radiation. The steam boiler tubes absorb the radiant heat from flame and radiate a small portion of the heat back to the furnace.

Convection is the process of transferring heat by movement energy through a material.

Example of heat transfer by convection in steam boiler:

Conduction is the transfer of the heat from one part of a body to other or from one body to another in physical contact.

Heat received by the heating surface travels through the metal by conduction.