What is Load cell?

A load cell is a transducer which converts force into a measurable electrical output.

1. According to the type of output signal generated

2. According to the way they detect weight 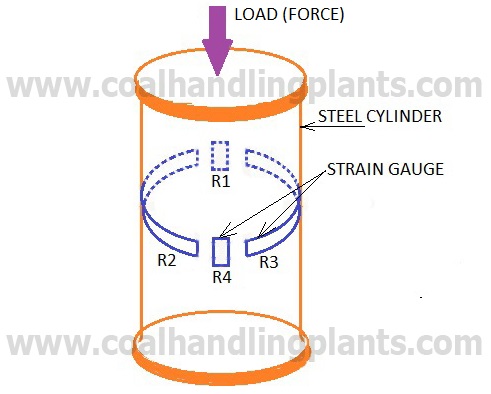 This change in resistance or output voltage of the strain gauge becomes a measure of applied force.

The main parts of the strain gauge load cell are a cylinder made up of steel on which four identical strain gauge are mounted and arranged in a Wheatstone Bridge. Out of four strain gauges, two of them (R1 and R4) are mounted along the direction of the applied load (vertical gauges). The other two strain gauges (R2 and R3 Horizontal gauges) are mounted circumferentially at right angles to gauges R1 and R4.

How does a strain gauge work?

When there is no load (force) on the steel cylinder, all the four strain gauges will have the same resistance. As the terminals N and P are at the same potential, the wheat stone bridge is balanced and hence the output voltage will be zero.

Now the load (force) to be measured (say compression force) is applied on the steel cylinder. Due to this, the vertical gauges R1 and R4 will undergo compression and hence there will be a decrease in resistance. At the same time, the horizontal gauges R2 and R3 will undergo tension and there will be an increase in resistance. Thus when strained, the resistance of the various gauges change. 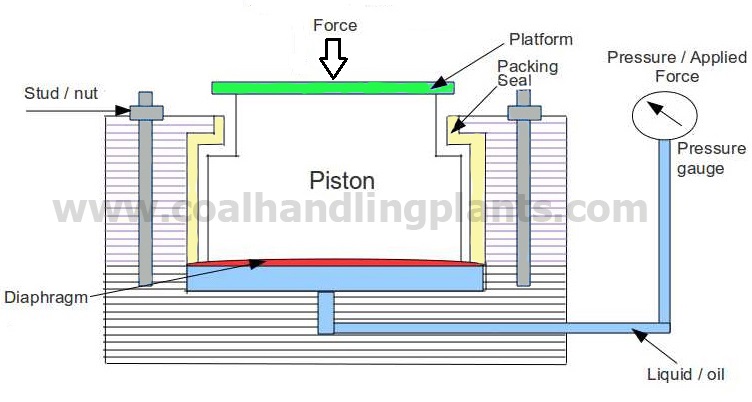 They are force -balance devices, measuring weight as a change in pressure of the internal filling fluid. 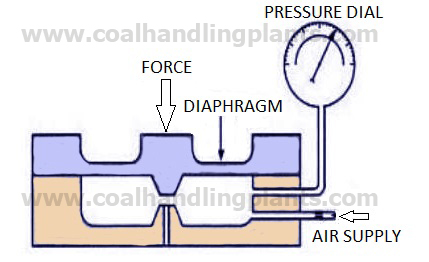 They also operate on the force-balance principle. The force is applied to one side of diaphragm of flexible material and balanced by pneumatic pressure on the other side. The counteracting pressure is proportional to the force and displayed on a pressure dial.

Pneumatic load cells are often used to measure relatively small weights in industries where cleanliness and safety are of prime concern.

The advantages of this type of load cell include their being inherently explosion proof and insensitive to temperature variations. Additionally, they contain no fluids that might contaminate the process if the diaphragm ruptures.

Disadvantages include relatively slow speed of response and the need for clean, dry and regulated air or nitrogen.